Silk crape is woven of hard spun silk yarn in the gum or natural condition. There are two distinct varieties of the textile: soft, Canton, or Oriental crape, and hard or crisped crape. Thin crêpe is called crêpe de Chine (“Chinese crêpe”).

The wavy appearance of Canton crape results from the peculiar manner in which the weft is prepared, the yarn from two bobbins being twisted together in the reverse way. The fabric when woven is smooth and even, having no crape appearance, but when the gum is subsequently extracted by boiling, it at once becomes soft, and the weft, losing its twist, gives the fabric the waved structure which constitutes its distinguishing feature. Canton crapes are used, either white or colored, for scarves and shawls, bonnet trimmings, etc.

The crisp and elastic structure of hard crape is not produced either in the spinning or in the weaving, but is due to processes through which the gauze passes after it is woven. In 1911, the details of these processes were known to only a few manufacturers, who so jealously guarded their secrets that, in some cases, the different stages in the manufacture were conducted in towns far removed from each other.[citation needed] Commercially they are distinguished as single, double, three-ply and four-ply crapes, according to the nature of the yarn used in their manufacture. They are almost exclusively dyed black and used in mourning dress.

In Great Britain, hard crapes are made at Braintree in Essex, Norwich, Yarmouth, Manchester and Glasgow. The crape formerly made at Norwich was made with a silk warp and worsted weft and is said to have afterwards degenerated into bombazine[citation needed]. A very successful imitation of real crape is made in Manchester of cotton yarn and sold under the name of Victoria crape.

Want to join the discussion?
Feel free to contribute!

Plaid For Every Occasion 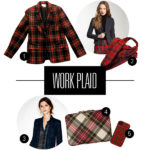