Così fan Tutti is a fascinating journey, curated by Marianna Agliottone, along 35 works and names of contemporary heritage, ranging from the emerging ones of our territory to some icons of the international scenario of the last forty years. The Vietnamese-born, Danish artist Dahn Vo opens the exhibition with the magical sculpture “We the people” (one of the 250 copper pieces that were composing the Statue of Liberty) which dialogues in harmony with the statues of Minerva and Mercury depicted in the frescoes of the room. A peaceful interaction arises between the large Arazzo by the Brazilian Alexander Maxwell, in which the images of the favela interact with the nineteenth-century furnishings of the golden sitting room, the sculpture “Beans of Mythology” by Satoshi Hirose’s which becomes the center of the Hall of Mirrors, the intense painting “Spazio anche più che tempo” by Carol Rama and the photograph “Three Jesus” by Gilbert & George. The show ends with Candice Breitz’s video installation “Double Whitney” (I Will Always Love You) thanks to which Whitney Houston sings in the Salone delle Feste.

The show you alla know 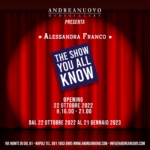